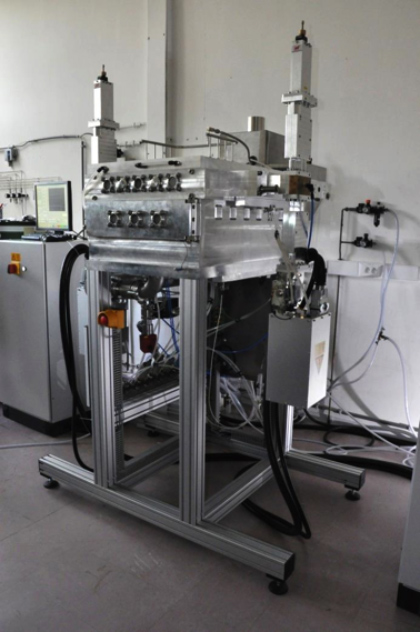 The quality of diamond thin films has steadily improved over the years. The number of interesting applications and products has significantly grown since it became possible to deposit homogenous and dense nano crystalline diamond films at temperatures from 300 to 400°C compared to ~1,000°C initially.

Our NCS 6-300 and NCS 3-150 coating systems exploit the linear coaxial antenna technology for sustaining the discharges with microwave power.

Supplying pulsed power rather than continuous waves provides high chemical conversion rates while reducing the heat load to the substrate.
The substrate temperature is independently controlled by infrared heaters and gas cooling.

Thermocouple, heater, cooler and a molybdenum substrate stage encapsulated by stainless steel sheets are mounted on a z-axis stage which can also rotate if required.

Our NCS 6-300 and NCS 3-150 are supplied with proven process know-how, which has been developed in conjunction with specialist partner companies.

Not only is carbon the central ingredient of the majority of all organic molecules on this planet, it begins to develop its potential in the crystalline world too. In between the two commonly known forms of pure carbon, graphite and diamond, an ever growing number of carbon based materials have been discovered or developed, some of which show unique properties.
Based on the revolutionary discovery of diamond synthesis in a vacuum environment, with its inherent morphology control in a plasma process, many different carbon materials have been developed: DLC - diamond like carbon, Buckminster Fullerenes and Nanotubes to name just a few.
But the story continues. Only recently, the Nobel Price has been awarded for the discovery of Graphenes, an extremely thin material of outstanding optical, electrical and mechanical properties.

The robust resources provided by our know-how base and expert networks in vacuum coating enables us to offer research and development solutions for a wide range of competitive functional and exotic coating processes and materials. We undertake exclusive development projects on our in-house platforms which offer customers alternatives as well as efficient economic facilities.

We provide mainstream thin film analysis based on mechanical and optical methods for quality analysis and improvement assessments. Maintaining specified thin film properties during production is important to our customers and their end users.